I wrote 2 Book vs. Movie posts (The Fault in Our Stars and The Hound of the Baskervilles), wrote a few Friday film talks and continued my 5 word movie reviews asking for your participation. Please consider adding your thoughts to these reviews since they count towards money for charity, maybe even yours!

The oldest movie I watched was The Hound of the Baskervilles, 1939

Cutest couple- Hazel and Augustus in The Fault in Our Stars

Hated-Snowpiercer. Violent and pointless.  I hear they are going to make a tv show based on it.  One I will not be watching 🙂 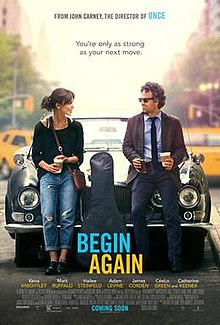 Begin Again. This was everything a great indie should be. Charming and romantic with a kick-ass soundtrack. Jason and I actually used an idea from this movie for our wedding anniversary this year.

pk. Jason and I are not familiar with Bollywood movies but this one was playing at our local theater and we decided to check it out.  It is so goofy and bizarre that it charmed us from beginning to end. It was also a packed theater and I hope to see more as our theater plays them. Spy. I loved Melissa McCarthy’s lead comedic role.  She was hilariously supported by the rest of the cast and I laughed.  And then I laughed some more.

Imitation Game. A great historical film about mathematicians trying to break the Germans enigma code.  Yes, I wasn’t too excited about the premise but the movie was very well done.

Selma. I liked this movie about MLK Jr.’s fight for equality.  Not afraid to show him at his weakest or most calculating, I was fascinated by this portrayal of a man who fought for justice.

So what was your favorite movie this year?