I’m pretty sure I received another book in the past few weeks but since I can’t seem to find it I’ll just go with these! 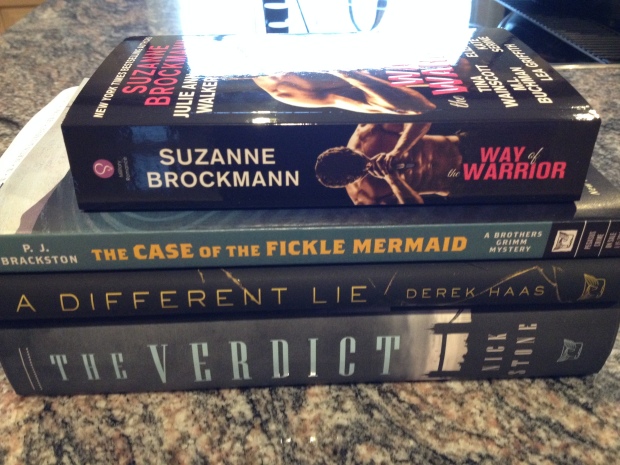 Way of the Warrior anthology of romance stories to benefit Wounded Warrior Project.  (was a win from Under the Boardwalk)

To honor and empower those who’ve served, all author and publisher proceeds go to the Wounded Warrior Project.

The Wounded Warrior Project was founded in 2002 and provides a wide range of programs and services to veterans and service members who have survived physical or mental injury during their brave service to our nation. Get involved or register for programs and benefits for yourself and your family online at www.woundedwarriorproject.org.

The Case of the Fickle Mermaid by PJ Brackston (sent from my friend Golda at WW Norton) Coming in January!

Gretel—yes, that Gretel—is now all grown up and working as a private investigator in 18th century Bavaria. Her professional interest is piqued when she begins to hear whispers of of mysterious goings-on off the coast of Schleswig-Holstein: sailors are disappearing, and there are rumors of mermaids and sea creatures and all manner of slippery, sea-based happenings. Ordinarily, Gretel’s interest in sea-life does not extend beyond that which is edible, doused in butter and garlic, and already on the plate before her. However, funds are low, and the captain of the ship Arabella makes a tempting offer of good pay and a free cruise in return for her detective services. With a splendid new wig packed, Hans as her bodyguard on the journey north, and the promise of two weeks of fine dining and erudite company whilst sailing around the picturesque Friesian islands, what could possibly go wrong?

Now a new dad, the infamous Silver Bear finds himself staying up late for feedings and changing diapers—all while leading the double life of a contract killer. The struggle is not with his conscience. He enjoys his gig. But a child forces him to weigh selfishness versus safety. Continue his line of work, and he’ll always wonder if he’s putting his child’s life at risk. His partner, Risina, serves as his fence. Like Columbus, she’s good at her job and likes doing it. An unusual take on working motherhood…

When the next assignment comes in, both Columbus and Risina are surprised to find that the mark is another assassin: a brash, young killer named Castillo. Castillo is an assassin on the rise. Even Columbus is impressed by his tenacity and talent—and as he closes in on his target, he realizes that Castillo is a younger version of himself. It’s almost like looking in a mirror. Castillo has even studied Columbus’s work. But Columbus’s assignment is clear: kill the young man.  However, Castillo learns that his hero and unwitting mentor has a family—a revelation with enormous ramifications.

Terry Flynt is a struggling legal clerk, desperately trying to get promoted. And then he is given the biggest opportunity of his career: to help defend a millionaire accused of murdering a woman in his hotel suite.

The only problem is that the accused man, Vernon James, turns out to be not only someone he knows, but someone he loathes. This case could potentially make Terry’s career, but how can he defend a former friend who betrayed him so badly?

With the trial date looming, Terry delves deeper into Vernon’s life and is forced to confront secrets from their shared past that could have devastating consequences for them both. For years he has wanted to witness Vernon’s downfall, but with so much at stake, how can Terry be sure that he is guilty? And what choices must he make to ensure that justice is done?