My favorite actors and actresses from A-Z.

I  Jeremy Irons (is there another I actor?)

Y  Sean Young (is there ANYONE else? She’s here by default)

I’m giving away my copy of Face Forward by Kevyn Aucoin, a makeup artist, emphasis on artist.  He transformed these actresses into icons and then tells you how he did it.  This book is so much fun to look through.  Julia Roberts as Julie Christie, Julianne Moore as Twiggy, Winonah Ryder as Elizabeth Taylor.  It’s an oversized hardcover.

Who is that as James Dean?  Go ahead and guess and I’ll tell you if you’re right. 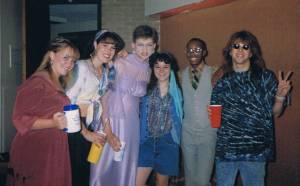 I spent two summers working as an Orientation Guide at Ohio State.  I loved it.  We all lived on the same floor in the Towers and had lots of downtime together.  You can see how we liked to spend that time 🙂  Okay, this 60’s themed party was the only one we had, but we did have lots of fun those summers.

I’m the little shrimp in the middle (I bought that outfit at the thrift store that day.  Those shorts are so big!).  I was 20. Hey, we’re halfway to 40 (but more than halfway to my birthday)!