I saw two Rachel McAdams films in February and thought it was time for a quiz about the actress with the ever-changing hair.  I like her and don’t even mind that my hubby has a bit of a crush on her.  I’ve listed her characters in the order that I like the movies best with the name of a co-star. These are only the movies I’ve seen.  Can you identify the movie?  Leave a comment telling me the # and the name of the movie.   You have until Friday at noon to submit your answers.

A few rules…No cheating.  No googling or looking at other commenter answers.  Yes, we’re going by the honor system…Your first answers will be the only ones accepted…Have fun!

This round for every participant I have (currently at $28)  I will put in a $ for a B&N gift card or a Babies R Us gift card for the winner. Even if you play only once you are eligible to win the second prize (something special I pick out) and you will be adding money to the kitty for the winner. 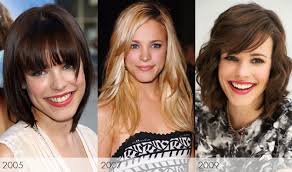 1. Regina George – 1994 – starred with Lindsay Lohan when she was actually an actress  Mean Girls

2. Allie – 2004- her vehicle to stardom with co-star Ryan Gosling  The Notebook

3. Claire Cleary – 2005 – Owen Wilson was a loveable mess in this one  Wedding Crashers

6. Lisa Reisert – 2005 – Cillian Murphy’s interest in her was more than casual  Red Eye

9. Amy Stone- 2005 – another movie with Diane Keaton  The Family Stone

10. Give the author of #2 or #8.  Nicholas Sparks and Audrey Niffenegger