April 23 is the UNESCO International Day of the Book, as well as Shakespeare’s birthday. It was also chosen in honor of Miguel de Cervantes, who died on April 23, 1616 (the same day as Shakespeare). In the Catalan region of Spain, the day is celebrated by giving a book and a flower to a loved one.

World Book Night was the product of a round table discussion at London’s Book Industry Conference in May 2010, the purpose of which was to imagine a way to encourage more adults to read. What better way to spread a love for reading than to inspire passionate readers to go out into their communities and share copies of their favorite books with those who don’t regularly read? Giving is an incredibly powerful part of our culture—and culture, art, and a writers’ talent are all themselves ‘gifts’.

On April 23,  25,000 passionate volunteers across America gave a total of half a million books within their communities to those who don’t regularly read. In 2012, World Book Night was celebrated in the U.S., the UK, Ireland, and Germany and saw over 80,000 people gift more than 2.5 million books.

I was honored and excited to participate for the second year in a row.  Last year I was able to pass out one of my favorite books, The Glass Castle, but this year was tougher for me since there wasn’t a favorite being offered.  I’d read 5 of the choices but wasn’t wowed by any of them.  I settled on the Tina Fey memoir, Bossypants.  My pick-up location was my old stomping grounds, the Bainbridge Library.  They asked the 3 of us Givers to come at the same time and gave us a nice bag of goodies-Panera cookies, chocolate, and a cute Yankee candle.  Needless to say, the treats did not last til April 23 🙂  One of the other women wanted to trade some books and I did.  It’s a good idea, BUT I hadn’t read her book and that made it hard for me to pass out.  It looked like a very nice book, Population:485,  but I won’t trade again unless I’ve read it.

On Tuesday, a friend who considers herself a light reader got a book, as did the dog walker we see when Gage and I take afternoon walks.  She was not a Tina fan so she chose the other one.  Then I went to the Cleveland Clinic Health Center in our city and passed out the rest, mostly to people who worked there, but I did give to the expectant moms waiting to see the doctor, telling them to read while they had the chance 🙂  I also got to meet a 3 day old baby.  Seriously, you forget how small they are.  I thought for sure he was a preemie and tiny, but no, he was a healthy 7.8 pounds and the sweetest thing.

If you didn’t participate, there is always next year! 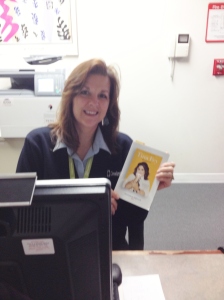 10 thoughts on “W is for World Book Night”