Watching four doctors, three members of the ambulance team, and more nurses than I could keep track of  surrounding your 3 month old son trying to insert a breathing tube will change you.  Watching them fail three times will probably stay with me for the rest of my life.  The fourth attempt was successful and then came numerous failed attempts to put in a second IV before getting us in the ambulance to transfer us from the pediatric ER to the Cleveland Clinic downtown.

As I sat in the front seat of the ambulance with Gage in the back racing toward the Cleveland Clinic where Jason and my Mom were waiting it was hard to have a coherent thought past the overwhelming fear that had taken over my body.  Just that morning Gage had been smiling and talking to me and Grandma, but he started vomiting  a few hours after I fed him.  We went to the doctor’s office and then straight to the ER .  He hadn’t stopped throwing up and he was so lethargic I was scared.  The doctor tried to reassure me, but the fact that she wanted to transfer us said enough.  Once we arrived downtown he was taken directly to ICU.  This was Monday.

They did two CAT scans, an upper GI test (he already had an ultrasound and body x-ray from his last trip to the ER), EKG, 24/7 heart monitoring and blood tests done.  He had teams of doctors, neurology and GI consults and yet no one could tell us why he had stopped breathing.  On Tuesday they took Gage off the ventilator and it took him six hours to wake up.  On Thursday they moved him out of ICU as he started eating on his own.  By this time he had been on so many drugs and stuck with so many needles I was sure he would never be the same.  But babies are resilient.  On Friday Gage was acting like his old self, but there was still no answer as to what had happened.

The hospital’s best people tried to take blood from Gage and only two were successful enough to get any blood and that is not enough to run all of the test they want.  We have a few tests pending, but the doctors think that they are long shots.  And if I want to have all of the tests run I’ll have to have them try to take more blood.  Watching them try to insert a breathing tube multiple times was the most difficult thing, but watching three doctors try to get blood from our boy on Friday with no success was a nightmare too.

So, they don’t know what happened or why and on Friday they want to send us home.  I am terrified of leaving without an answer.  If I don’t know what caused it how do I know how to avoid it?  What if it happens again?  When I realized that even another night in the hospital would not answer these questions I agreed to take him home on Friday night.  Gage, Jason, and I had not left the hospital since Monday, but as we drove home it seemed like a month.

I am so thankful for Gage’s recovery.  So many people were praying for him and I choose to believe that our prayers were answered and the reason that they can’t find anything wrong with him now is that it’s been fixed already by someone more powerful than a team of doctors.  But those are only in my most positive moments.  The rest of the time I am in a state of worry and panic.  My mom will be staying with us this week and that is a huge help.  It is nice to be home with our son who seems to be more recovered than I might ever be.

Yesterday Gage was home for his four month birthday and he enjoyed spending time with his grandparents. 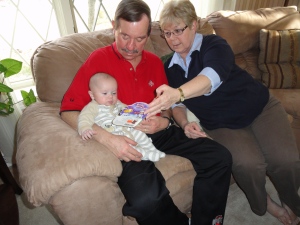 This has been the hardest week of my life and although Gage is doing better I cannot say the same for myself yet.  I am hoping one of the tests may tell us something, but there is the very real possibility that they won’t and  that is going to be difficult, but that fact that Gage is home and doing well is enough for me.

31 thoughts on “Sundays with Gage – Ventilators, ICU, Medical Mystery, and a Miracle”