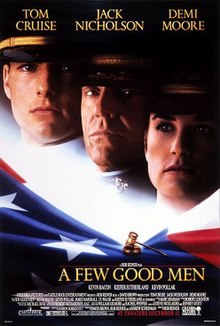 Two Marines are accused of murdering a fellow Marine at Guantanamo Bay and an untried Navy lawyer is chosen to defend them.  The accused, Dawson and Downey, are not the easiest clients, and Kaffee, is not the most understanding lawyer.  Forced to deal with a lawyer from Internal Affairs and an arrogant Colonel Jessep, Kaffee feels the pressure to clear these Marines of all charges.

Why I Love It – There is much to like about this film, but the performances by Tom Cruise and Jack Nicholson are at the top of the list for me.  Tom Cruise manages to carry this movie with his cocky and winsome Kaffee.  And Nicholson was the perfect Colonel Jessep and his performance places this movie in the great category for me.  I know how ridiculous the last scene of the movie is from a reality standpoint, but I really don’t care.  I loved every minute of it.  And it provided so many unforgettable lines that the movie is still being referenced more than 15 years later.

They were not the only awesome performances.  I thought everyone in the movie was spot on.  Even if Demi Moore’s character was a little too gung-ho and melodramatic at times she did provide the patriotism needed to make the movie work.  The cast alone makes this a must see if only to use it in the Kevin Bacon game.

I liked revisiting Gitmo in its pre-hot button issue years.  There did used to be a base there that did not have politicians foaming at the mouth.  The courtroom story was excellent and the movie was fun to watch.  I think this is my highest rated courtroom drama because it did not rely on tricks or any great surprise at the end, it was just a well told story by a group of talented actors and film makers.  And all those men in uniform made it visually appealing.  C’mon, I did marry a Navy man after all 🙂