I am a Jack Reacher fan. I’ve just finished the 9th book in this long-running series and it happens to be the one on which they based the Jack Reacher movie.  I didn’t hate the movie like many did and I thought the book was good.  So how do the 2007 book and the 2012 movie compare?  Let’s take a look.

The Story/Plot    The story is sort of the same, a mass murderer who was easy to catch but proclaimed his innocence is facing a sure conviction.  Enter Jack Reacher, ex-military police, who comes to prove the murderer’s guilt only to change his mind.  Except for a few second-tier characters essentially missing from the movie and a switcheroo at the end, the stories are close.   Unfortunately, those secondary characters helped make the book better.  Thumbs Up- Book

The Visual  This category is usually, at best, a tie. I mean the movie is almost always better since that’s what its purpose it, but in this case it’s not so easy.  Like many things in the movie, the sets were…underwhelming?  This is not a story based on a location (other than it being quintessential midwest) but it is based on action and they could have done so much more.  Since I listened to the audio of the book I was able to better visualize the scene (Sometimes when I’m reading a fast paced thriller I don’t take the time. Is that wrong?) and it was superior to what came across on-screen.  It can be different, but a movie should be able to win this one.  It didn’t.  And I’m not even talking about Tom Cruise trying to portray a 6’5″, 220-250 lbs., 3XLT coat wearing menace.  I’ll get to that next.    Thumbs Up- Book

Characters vs. Actors  Ok, let’s start with the obvious. 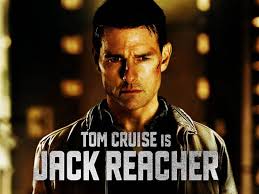 Sure, Tom Cruise plays Jack Reacher but saying he is Reacher is a stretch.  Lee Child’s Reacher is supposed to be a menacing man who intimidates by size and attitude.  It’s a total package.  Yes, Cruise can command a room with his presence and he did an okay job with the attitude, but the whole package was missing something.  I am not slamming Cruise. I actually thought he did an okay job, but then again my expectations were low.  I didn’t like Rosamund Pike as the doe-eyed lawyer, but maybe it’s because they had to add the romantic element that wasn’t there in the book.  It felt forced.  I missed a few of the characters from the book, news anchor Ann  Yanni, private investigator Franklin and ex-lover Eileen Hutton, all added much needed depth to the story.  The movie was so focused on Reacher and Helen that it ignored the parts of the story that made it more believable.   Thumbs Up- Book

The Ending  The endings were a little different, not dramatic enough hate either one, but enough to notice.  This is when the extra characters in the  book made the end make more sense.  And the hostage used to lure Reacher in to the final shoot out was different and so much less melodramatic when Lee Child wrote it.  The movie felt expected, like I’d seen it on-screen before, so it wasn’t bad, just boring.  Thumbs Up- Book

And the winner is…The Book!!

Now it’s your turn to vote!

22 thoughts on “Book vs. Movie – One Shot/Jack Reacher”