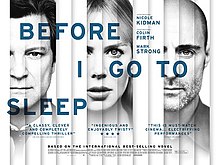 I finished the debut work by SJ Watson last week and watched the movie with Nicole Kidman, Colin Firth, and Mark Strong last night.  I’m going to try and be as spoiler free as possible, which is hard to do with a thriller.

Story/Plot Christine wakes up every morning with no memories of her life, except for a few random memories from childhood.  She goes to the bathroom where there are photos taped on the wall of her and her husband Ben.  Every morning Ben goes off to work and she stays home.  When the book and story begin she receives a phone call when from a doctor telling her where to find the journal she has started keeping that might help her understand what is happening to her.  In the book her journal is written and in the movie it’s a video journal she keeps on a camera.  From here there are similarities (the doctor, the best friend) and differences (the relationship with the doctor, the memories that come crashing back, the order of things, the accident, her occupation) but the vibe and intent is the same.  What the movie missed was the day to day helplessness of her situation that kept this reader on the edge of her seat.     Thumbs Up – Book

The Visual They both take place in England and in the book she lived in a city, but the movie has them out a bit and there are lots of shots from above showing the countryside.  The movie looked a little more gloomy than what I pictured in the book, but there was no clear advantage either way.  Thumbs Up- Tie

Characters vs Actors  I love Colin Firth (the real Mr. Darcy) and thought he did a good job with the character.  I thought Nicole Kidman was a good choice for Christine.  I liked Ben Strong as the doctor BUT the changes they made with that character, his age and a few other relationship differences did make me think the movie missed an opportunity.  I understand why they did it, but I would have liked to see the doctor a little younger as he was in the book, more like a Taron Egerton.   Thumbs Up- book

The Ending  The climax of the movie was similar with a few different choices that I’m willing to call a wash, but the movie really finished with the perfect pulling on the heartstrings moment.   Thumbs Up- movie

And the winner is…the BOOK!