Nevertheless, though this cross-section of humanity had shared the same experiences and had drawn the same conclusions – that their species was no longer the most intelligent on the planet and their dominion of Earth had been usurped – they could not come together to devise a mutually agreeable response to the threat.  Four philosophies divided the occupants of the tavern into four camps.

Molly and Neil live in a small mountain town, secluded from the big cities and vacations spots.  One night it starts raining, only the rain is not rain and it is raining everywhere in the world at once.  Molly and Neil decide they need to join with others for safety and head to town, where they find four groups of people.  At the meeting place in the tavern they are cut off from the world, no television, internet, phones and there are those who think the world is ending and they plan to meet their maker drunk and happy, those who say to wait to talk to the invaders, those who want to stock up on gun power and take the fight to the occupiers, and those on the fence, undecided between three bad choices.

Molly, with some prodding by a dog named Virgil, decides she and Neil need to round up all the children and get them to safety, although they have no idea where that may be.  The world is being consumed by a fungus and ghostlike entities that can walk though walls.  As Molly and Neil head around town there is peril at every turn and the Earth’s final days seem like a foregone conclusion.

This book is a spooky nightmare full of despair and surprising faith.  It is an alien film come to life on the page and seen through the eyes of a young woman trying to do the right thing even if she doesn’t know what that is.  This book will scare you and it may depress you, but it will also make you think.  I wish I could tell you about the unexpected ending, because there is a lot to discuss, but I can’t without ruining the book.

I really enjoyed it and it is perfect if you are in the mood for some spooky Halloween reading.

This book was from my personal library. 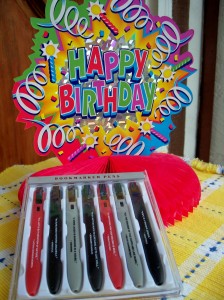 Today’s Freebie is a set of 7 Bookmark Pens.  They are slim ballpoint pens with clips to attach to your book and they each have a different quote on them.   The quotes include

“Hope is a waking dream.” – Aristotle

“All the sounds of the earth are like music.” – Oscar Hammerstein II

“Everything you can imagine is real.” – Picasso

“Wish not so much to live long as to live well.” – Benjamin Franklin

“A good laugh is sunshine is a house.” – unknown

“Nature does nothing uselessly.” – Aristotle

“All art is but imitation of nature.” – Luciuas Annaeus Seneca

These are great for book reviewers or as gifts.

To enter to win leave a comment with your email address.

Open internationally.  Winner will be picked on October 11th.