This is a semi-regular feature where I talk about which was better, the book or the movie.  Most of the time I don’t know which will come out on top until I’ve worked my way through some of the criteria, but this one was an easy pick.

The Story/Plot  In a small English village dominated by a huge castle, Louisa lives with her family working dead end jobs to help her family make ends meet.  She is inexplicably hired by the Traynors of the castle to be a companion to their son, who is in a wheelchair due to a spinal cord injury.  Will is depressed, moody, and pushes everyone away because of the pain he’s in, both mentally and physically.  Louisa is chatty and energetic and it isn’t long before the two start to form a friendship.  When Louisa finds out why she was really hired she goes into overdrive trying to make Will feel like his life can be just as good as it was before the accident.

The movie left one very important plot piece out, why Louisa didn’t stay at school and why she was still living at home.  Did the movie have to have it? No.  But Louisa, and the book, were better off for it.   Thumbs up…book

The Visual  This is a tough one because I really don’t think there was much of an advantage seeing it onscreen.  Sure, it was nice to see the pretty castle scenes, but everything else was pretty much just as good in my head as I was reading it.   Thumbs up…tie

Characters vs. Actors  Here’s where I might hear from some of you.  I pretty much hated Emilia Clarke as Louisa.  She got some things right, yes, but her eyebrows took on the bulk of the acting and I spent more time watching them on screen than anything else. 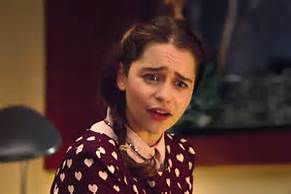 She was not Louisa.  I thought Sam Clafin did a good job as Will and Louisa’s boyfriend, Matthew Lewis, was spot on as Patrick.  The parents of both were excellent.  So, it was really Louisa that was the problem for me and that was a pretty big problem.   Thumbs up…tie

The Ending  So, given my complaints about Louisa, imagine my surprise when I was crying at the end.  I knew the end.  It was not a surprise.  Yet, I cried quite a bit.  Jason watched it with me and didn’t know the end and he didn’t cry because he didn’t believe it.  He was still unsure about it and I can see that.  The last scene with Louis and Will felt rushed.     Thumbs up…book