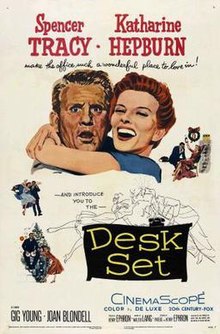 This was the 8th pairing of Tracy and Hepburn and their first color film.

Bunny (Hepburn) is the head reference librarian in the research department at the fictitious Federal Broadcasting Company.  She has a beau in the company and after seven years she still holds out hope for more.  Sumner is an efficiency expert and a man with a machine, EMERAC.  As he spends more time in the research department the women there start to fear for their jobs.

Why I love it – I’m a Hepburn fan (Katherine and Audrey). I love the strength, smarts and independence that Katherine pulls off in every film.  She was able to shine as the woman who knows everything (or at least how to find it). I like Tracy well enough, the easy chemistry between them seems so comfortable after all of their years and roles together.

Like the recent Hidden Figures, it is about an office of women depended on for their intelligence who were slowly being replaced by computers.  Remember when we had to use the card catalog to find references and information?  Well, these women were Google before Google.  Librarians don’t get enough big screen attention.

It’s light and fun and the dialogue is sharp. A smart romp that will leave you smiling.

I realized this last time I watched it that the screenplay was written by Henry and Phoebe Ephron, parents to Nora who would go on to write so many iconic romantic comedies.