This month I’m focusing on movies, but I plan to compare the book to the movie in another post so I’ll tell you about the book since I just finished it. 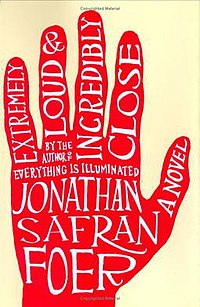 Nine-year-old Oskar Schell is a precocious Francophile who idolizes Stephen Hawking and plays the tambourine extremely well. He’s also a boy struggling to come to terms with his father’s death in the World Trade Center attacks. As he searches New York City for the lock that fits a mysterious key he left behind, Oskar discovers much more than he could have imagined.             from Goodreads

This description is accurate but not complete.  There are really three storylines, with Oskar’s voice carrying most of the story.  His grandmother and grandfather are the other two narratives and to say that this family is a little different is an understatement.

Oskar is an old nine and very likely on the autism spectrum even though it’s never stated specifically.  After his father dies on 9/11 his emotions spiral, so some of the autistic like traits could stem from that, but I personally thinks he’s an asperger’s boy with many of the strengths.  I love that his dad really played up those strengths so when we saw Oskar hoofing it around New York on his own it didn’t seem completely out of the question.  I love Oskar.  I recognized my son in him and fell in love. He also made me laugh and broke my heart.  By being true to himself he brought happiness to people’s lives.

The dueling grandparent narratives were okay.  They were both broken people so their stories sometimes contradicted each other and always left me feeling sad.  For much of the book I had some sympathy for the mute grandfather and little to spare for the grandmother.  I guess that held true but I did at least understand the grandmother better by the end.

I think I would have really loved this one if I had read the actual book.  I understand that there were drawings and illustrations that really helped make this something special, but the library didn’t get the book to me in time 😦  When it comes in I will flip through a take a look.  For that reason I don’t recommend the audio.

Take a chance and fall in love with Oskar.