It’s been a month? since I posted he books that came into my house. Ugh! Since Gage started school it seems I have had less time for blogging but I’m hoping that turns around.  October, our month of celebrations, is winding down and I’m thankful.  I’m also thankful for all of these goodies that arrived. 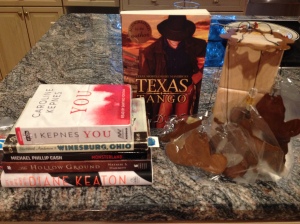 Texas Tango by Cynthia D’Alba and the cowboy wind chime arrived from the author after a win at Writerpsace.com

Dr. Caroline Graham is happy with her nomadic lifestyle fulfilling short-term medical contracts. No emotional commitments, no disappointments. She’s always the one to walk away, never the one left behind.

Travis Montgomery has one dream left—to build the ranch he and his wife planned before he lost her to cancer. There’s just one thing standing between him and the last bit of acreage he needs—a last living heir who has one traveling foot out the door…and an unusual request that challenges his determination to never again place his heart at risk.
Warning: This book contains a tortured widower who doesn’t want a wife and an independent doctor who doesn’t want a husband. Hot stuff between the sheets and failed efforts to avoid emotional involvements.

When a beautiful, aspiring writer strides into the East Village bookstore where Joe Goldberg works, he does what anyone would do: he Googles the name on her credit card.

There is only one Guinevere Beck in New York City. She has a public Facebook account and Tweets incessantly, telling Joe everything he needs to know: she is simply Beck to her friends, she went to Brown University, she lives on Bank Street, and she’ll be at a bar in Brooklyn tonight—the perfect place for a “chance” meeting.

Winesburg, Ohio by Sherwood Anderson arrived from the lovely and generous Care 🙂

Winesburg, Ohio (1919) is Sherwood Anderson’s masterpiece, a cycle of short stories concerning life in a small town at the end of the nineteenth century. At the center is George Willard, a young reporter who becomes the confidant of the town’s solitary figures. Anderson’s stories influenced countless American writers including Hemingway, Faulkner, Updike, Oates and Carver. This new edition corrects errors made in earlier editions and takes into account major criticism and textual scholarship of the last several decades.

Welcome to Monsterland – the scariest place on Earth. All guests can interact with real vampires in Vampire Village, be chased by an actual werewolf on the River Run, and walk among the dead in Zombieville.
Wyatt Baldwin, a high school student and life-long movie buff is staring bleakly at a future of flipping burgers. Due to a fortuitous circumstance, Wyatt and his friends are invited to the star-studded opening of Monsterland. In a theme park full of real vampires, werewolves and zombies, what could possibly go wrong?

The Hollow Ground by Natalie S Harnett was a birthday gift from my mom.

The underground mine fires ravaging Pennsylvania coal country have forced Brigid Howley and her family to seek refuge with her estranged grandparents, the formidable Gram and the Black Lung stricken Gramp. Tragedy is no stranger to the Howleys, a proud Irish-American clan who takes strange pleasure in the “curse” laid upon them generations earlier by a priest who ran afoul of the Molly Maguires. The weight of this legacy rests heavily on a new generation, when Brigid, already struggling to keep her family together, makes a grisly discovery in a long-abandoned bootleg mine shaft. In the aftermath, decades’ old secrets threaten to prove just as dangerous to the Howleys as the burning, hollow ground beneath their feet. Inspired by real-life events in now-infamous Centralia and the equally devastated town of Carbondale, The Hollow Ground is an extraordinary debut with an atmospheric, voice-driven narrative and an indelible sense of place.

Let’s Just Say It Wasn’t Pretty by Diane Keaton came from my mom too.

Diane Keaton has spent a lifetime coloring outside the lines of the conventional notion of beauty. In Let’s Just Say It Wasn’t Pretty, she shares the wisdom she’s accumulated through the years as a mother, daughter, actress, artist, and international style icon. This is a book only Diane Keaton could write—a smart and funny chronicle of the ups and downs of living and working in a world obsessed with beauty.

In her one-of-a-kind voice, Keaton offers up a message of empowerment for anyone who’s ever dreamed of kicking back against the “should”s and “supposed to”s that undermine our pursuit of beauty in all its forms. From a mortifying encounter with a makeup artist who tells her she needs to get her eyes fixed to an awkward excursion to Victoria’s Secret with her teenage daughter, Keaton shares funny and not-so-funny moments from her life in and out of the public eye.