I’ve done this before, but last week I was able to meet two new-to-me authors at a Library Week event and I wanted to feature them in some way.  I’ve given you a small stack of my signed books and you just have to tell me which book belongs to which author.  There are a few extras in the stack just to make it more interesting.

Take your best guesses, be entered to win a prize.  No cheating (using the web to help find answers) or copying.  You have til Sunday to enter.  All extra details can be found here.

You only need to guess one to be eligible for a prize. 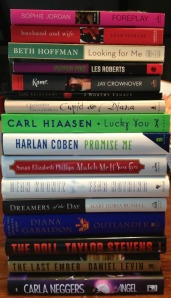 Most of the songs that I sang to Gage when he was a babe were from this movie.  During college I watch this movie to help me fall asleep (yes, I know, weird).  It remains one of my all-time faves and such a comfort movie.  I did not like what they did to it when they translated it to tv last December.

TIE! The Sparrow by Mary Doria Russell AND The Secret Life of Bees by Sue Monk Kidd

The Sparrow is a must read! This book is not only highly entertaining, but also very thought provoking. What would your reaction be if you learned that NASA had just discovered music being sung from a planet four light years away from earth? Would it shake your belief in God or make it stronger? What if you were chosen with six others to travel to this planet, knowing that by the time you returned back (if you did) those important to you would probably be dead? What if you were the only one from the mission who made it back to earth alive?  Russell blows me away with her first novel.

The Secret Life of Bees, it’s 1964 in South Carolina and Lily is a fourteen year old living with her abusive dad and the knowledge that she killed her mother.  All she has of her mother is a photo and a picture of a black Mary with the words Tiburon, South Carolina written on the back.  When she chooses to spring her nanny, Rosaleen, from jail they hitchhike to Tiburon so Lily can find the memory of her mother.  What she finds are three African-American beekeepers that live in a pink house.  The three sisters take  in Lily and Rosaleen.  Not a faulty note in this southern novel.

I first read The Pilot’s Wife and loved the complexity of it.  I’ve read three more and really liked each of them.

Can you believe I’ve seen 25 Ben Stiller movies?  I can’t!  Some people don’t think he’s funny, but I love him and he makes me laugh every time.  My favorites are  There’s Something About Mary and Meet the Parents, but Gage loves the Madagascar movies so I get to hear him as Alex the lion quite often.