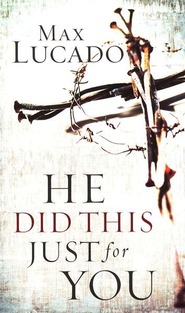 My cousin gave me this slim book(let) a few years ago and I just got around to taking the 20 minutes or so to read it.  This is a great book to give a person to explain the Christian faith in the simplest of terms.  There’s nothing new here, but it might be a good thing to have to pass along to someone who needs reassurance.  The very cool art on the cover was left for Lucado by an anonymous churchgoer.

Katharine Hepburn was a woman before her time.  Now she would be considered a rebel, or trend setter, but back in the 1930’s her independent and feisty nature turned audiences off and after successes she became known as box office poison.  Until a turn on Broadway in The Philadelphia Story gave her an opportunity to turn her reputation around.  She bought the rights to the story and in 1940 made one of my favorite movies ever.  Her outspoken personality, unconventional life, and a 25 year affair with actor Spencer Tracy make her one of the more interesting (and talented) actresses of the 20th century.  I think I’ve seen about 10 of her movies and consider some of them my favorites – Desk Set (1957), State of the Union (1948), Summertime (1955).  Do you have a favorite movie of hers?

I have a confession to make.  I have not read The Hunger Games trilogy (gasp!).  I was impressed by how well done the movie was and I fell in love with Katniss.  She was a bad ass and I loved her bravery and smarts in the face of opposition.  The games themselves were cool and I was on the edge of my seat to see what would happen next. I liked the next movie too and am so looking forward to watching the rest. Maybe because I love the movie(s) so much I have no desire to read the books.  That may be a first for me.

I admit that I didn’t fall in love with the series until book 3, Harry Potter and the Prisoner of Azkaban, but after that I couldn’t get enough.  For those of you who have read the whole series you understand when I say that I remember where I was when THAT BAD THING happened in book 6.  I was visiting a friend in Chicago and I was trying to sneak in some reading time before dinner and then, bam!, tears.  I had to pull myself together enough to look like a normal adult who wasn’t all wrapped up in Harry Potter and I think it worked.  I am looking forward to reading these with Gage someday, but they may be a little too magical for him.  Time will tell.

Beth’s first book Saving Cee Cee Honeycutt was the first book I read in 2010, then I was able to interview her through an exchange of emails before finally meeting her for the first time all in the same month!  I was able to meet her again last year when she was on her book tour with Looking for Me and consider her one of warmest and most genuinely appreciative authors I’ve met.  She also makes the time to stop by here and leave comments, isn’t she cool?  Listen to her speak if you can and for sure read her two books, both are excellent!