This post would be very long if I tried to recap our entire Friday-Monday trip so, I’ll try to highlight the basics with some pictures.

For Gage’s first time out of Ohio we headed up to Michigan where we met up with Grandpa and Kris for Gage’s first RV trip.  We headed further north to Northport where we went to the yearly fly-in & pancake breakfast at the Woolsey Airport. 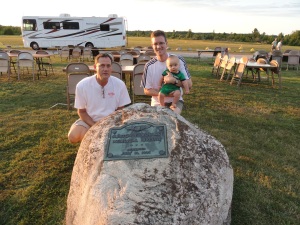 We parked the RV at the airport the night before.  This airport is named after Clinton F. Woolsey, Gage’s great-great grandpa, a pilot who earned a Distinguished Flying Cross (details here about Woolsey & the airport).  He died while performing in an air show.  Here’s the link from Time magazine in 1927.

We met some Woolsey relatives who still own property on Grand Traverse Bay.  This cabin was built by Gage’s great-great-great grandfather.

They invited us to hang out on their beach and go swimming. Gage LOVED skinny dipping 🙂  Since I want this to be PG blog I am not including the cutest pics, but this one isn’t bad. 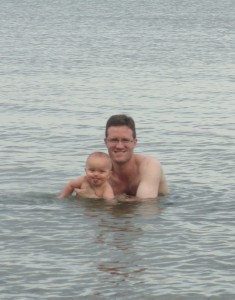 When we camped out at the airport we made friends with Lawrence, a pilot who had flown in for the day.  He took the men of the family for rides in his Cessna.  Gage was not allowed to go, but he did get a sneak peek.

The love of flying must be in the blood.

Lawrence took Jason for a two hour trip and let him fly and land the plane.  How small was this plane?  Let’s see how it compares to Jason and Lawrence. 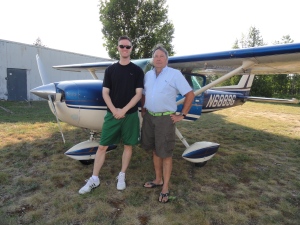 No, I wasn’t worried at all while they were gone.  Uh huh.

After we headed south we stopped in Flint so Gage could meet his grandma and great-grandpa for the first time.

We had a fun time at the park before heading home today.  It was a long weekend, but Gage had so much fun.  It was a great weekend with family and learning about Gage’s heritage.

21 thoughts on “Sundays (almost) with Gage- A weekend of firsts.”