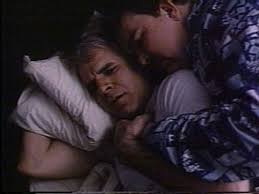 waking up after sharing the same bed on the motel]
Neal: Del… Why did you kiss my ear?
Del: Why are you holding my hand?
Neal: [frowns] Where’s your other hand?
Del: Between two pillows…
Neal: Those aren’t pillows!

Pretty in Pink (1986).  Wrote screenplay.  I love this movie and soundtrack.

Some Kind of Wonderful (1987)  Wrote screenplay.  I’ve included a few bookish quotes from the movie.

Keith Nelson: You can’t tell a book by its cover.
Watts: No, but you can tell how much it’s gonna cost you.
Keith Nelson: Wow, I never knew you were so deep.
Watts: You want shallow, call Amanda Jones.

Watts: It must be a drag to be a slave to the male sex drive.
Keith: It’s not just sex.
Watts: Oh, you want to start a book club with her?

I’m limiting myself to 5 or this post would be way too long!  Do you have a favorite John Hughes movie?