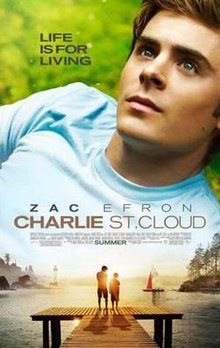 I read the book (with the longer title) last month and was happy to see that Netflix had the 2010 movie ready for me.  I actually had the copy of the book with Zac Ephron on the cover so was picturing him as I read and that wasn’t really a problem 🙂 Sometimes I don’t know which will come out on top until I work through the categories, but I know even before I start which one worked better here.  I’ve tried not to contain spoilers.

The Story/Plot Charlie St. Cloud is a young man who was going places before a crash in high school killed his little brother.  He made a promise to his brother not to leave him and to meet him in the woods every evening to practice baseball.  So, Charlie takes a job at the neighboring cemetery so that he can keep that promise.  Not only can he interact with his dead brother but also the other spirits who are dead but have not yet crossed over.  Enter Tess who catches Charlie’s eye and tests his commitment to his brother.

This framework is the same for both the book and movie.  There were fewer spirits in the movie (which I missed), his relationship with his brother was closer in the book, the stuff with Tess happened way out of order in the movie to the detriment of the story, and there was more discussion about life after death in the book.   Thumbs up…the book

The Visual  The New England Coast is a beautiful place and the movie held up its end, although I read that they filmed in Canada.  Either way, it was beautiful.   Thumbs up…the movie

Characters vs. Actors  Since I pictured Zac Ephron as Charlie while I was reading the book he became Charlie for me.  I thought that they would have someone else play his younger 15 year old self in the movie, but instead they made his younger self 18 so there wouldn’t be another actor.  I wasn’t a fan of the aging, but I liked Ephron in the role.  My husband’s favorite part of the movie was the younger brother, Sam, but that’s because he hadn’t read the book I think. The book Sam was a much happier spirit and I preferred him.  Kim Basinger was the mom who made a brief appearance in the movie, but the mom was never part of the action of the book.  She didn’t add much or serve any purpose.  For some reason they aged and changed the EMT who saved Charlie’s life so Ray Liotta could play him.  The only reason I can see that they did this was so they could get a big name in the movie even if only for a scene or two.  The movie messed with the second scene between these two characters so the big name was a wash for me.  Amanda Crew was fine as Tess.  There were additional secondary characters in the movie that were completely unnecessary.   Thumbs up…the book

The Ending  The end result was almost the same, but I could’ve skipped the extra melodrama of the movie.  Thumbs up…the book

And the winner is…the book!  If they had stuck with the simplicity of the book the movie would have been so much better.