Gage has plenty of places for books, but sometimes, when the books start spewing over the places I need to walk, I make him go through his entire library and give a yea or a nay.  Yea and we keep it;nay we give it to other kids by donating it.  The nay pile is never very big and this time around I thought he did great with nine.  Sometimes there are books I think he might like but we just haven’t read them at the right time so I make him read it one more time to decide.

The first one I knew he’d probably reject but since it’s all rhyming words and that’s something we’re working on right now (this concept is proving difficult for some reason), we read it anyway.  Play Day by Bruce McMillan .  And, as expected, it was placed in our giveaway pile.

The second was one that Jill sent us last year, The Bedtime Book for Dogs by Bruce Littleworth and illustrated by Paul Heath. 32 pages, published in 2011. 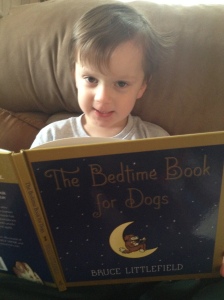 It’s about a dog who wants to play but his human friend is busy so he takes himself out for a play date.  He carries his own leash, opens the door, and goes to the park.  But even as he plays he is lonely because he doesn’t have a friend to share in the fun.  When he returns home he is happily greeted by his friend with a treat.

The illustrations are colorful and simple. There aren’t a lot of words and the story is short.  I didn’t care for the takeaway of not being able to enjoy the park because he was by himself though but it was a fun book.

When I asked Gage to find me his favorite part of the story was, he decided on this…

He liked when the dog opened the door and let himself out. Of course this would be his favorite part, because this is the other bad lesson of the book, the dog is being naughty!  Just recently Gage has decided it’s okay for him to go out into the garage without anyone knowing, where before he would patiently wait by the door until mom or dad was there, so the fact that this bad dog let himself out made Gage laugh, but not this mama.