Gage’s first week off from school has left me terribly behind in my blog hopping.  He starts camp a few hours a day on Tuesday so maybe I can catch up with you all this week! 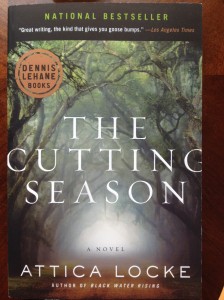 The Cutting Season by Attica Locke

Just after dawn, Caren walks the grounds of Belle Vie, the historic plantation house in Louisiana that she has managed for four years. Today she sees nothing unusual, apart from some ground that has been dug up by the fence bordering the sugar cane fields. Assuming an animal has been out after dark, she asks the gardener to tidy it up. Not long afterwards, he calls her to say it’s something else. Something terrible. A dead body. At a distance, she missed her. The girl, the dirt and the blood. Now she has police on site, an investigation in progress, and a member of staff no one can track down. And Caren keeps uncovering things she will wish she didn’t know. As she’s drawn into the dead girl’s story, she makes shattering discoveries about the future of Belle Vie, the secrets of its past, and sees, more clearly than ever, that Belle Vie, its beauty, is not to be trusted. 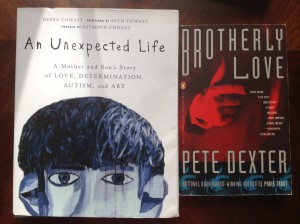 Picked up these two at independent bookstore, Visible Voice Books in Tremont.  I heard author Debra Chwast and her son, Seth, speak at a luncheon last year about his journey through art and I’m excited about reading about their story.

An Unexpected Life: A Mother and Son’s Story of Love, Determination, Autism, and Art by Debra Chwast

Diagnosed with severe autism as a toddler, Seth Chwast seemed trapped in his own insular universe. His family endured anguish, sought countless therapies, and almost gave up hope. Then, at age 20, Seth took a painting class, and everything changed. Miraculously, he revealed an innate ability to create amazing artworks that reflect his own unique perspective and gave him a voice he had never had.
Written by Seth’s mother, Debra, An Unexpected Life tells the story of their long difficult path, and her determination to help her son. Although Seth cannot safely cross the street alone, he is an icon for anyone who has been in a hopeless situation and then triumphs. More than simply a memoir, this visually breathtaking volume is infused with hope, inspiration, and art.

Left an orphan when the car his father, a powerful Philly union boss, is driving careens out of control, Peter Flood tries to distance himself from the family business while his cousin, Michael, enters the world of crime.

Paul Russo’s wife just died. While trying to get his family’s life back in order, Paul is being tormented by a demon who is holding his wife’s spirit hostage on the other side. His fate is intertwined with an old haunted mansion on the north shore of Long Island called Stillwell Manor. Paul must find clues dating back hundreds of years to set his wife’s soul free.

The Hanging Tree. Set amid the eerie backdrop of Long Island, an area famously steeped in old legend, two young would-be lovers contemplate their future while visits from those who have come before them reveal the lure of fate…and the power of free will. At seventeen years old, Arielle’s relationship with her parents is slowly deteriorating. Angry and defiant, she is at a loss on how to cope with the tumultuous situation in which she finds herself. Arielle’s only comfort is Chad, an eighteen-year-old young man who seems to truly understand her struggles.

I Want to Do Yoga Too by Carole P Roman

Hallie and her mother go to the yoga studio. Hallie wants to join her mom’s yoga class, but she isn’t allowed. She complains to the babysitter, who gently guides her through four yoga poses. Hallie learns that not only is yoga easy, but fun as well.

Among the topics that are introduced in this journey to Australia are the unusual indigenous animals, the extraordinary Great Barrier Reef, the currency, the beloved game of cricket and the national holiday, Australia Day, as well as the special nicknames people have for one another and the curious taste sensation, Vegemite.

So, did you get anything fun in your mailbox this week?