Gage had a few words at 14 months and a few more at 15 months, Up, No, Uh-Oh, Pop and Wow being his go-to words.  Now he’s a big boy at 16 months and new words are coming more frequently.  His favorite word this month is That and he uses it ALL THE TIME.  The pointer comes out and he wants to know what everything is.  Sometimes it’s a blank wall and sometimes it’s the 15th time I’ve said sock that day.  Either way it’s nice to hear him use words even if we’re not exactly having a conversation.

So, what’s the danger of this explosion of new words?  Well, they aren’t exactly perfected quite yet and by far the most embarrassing is Gage’s love for clocks.  He tries to say it, he does say it, quite a bit.  Loudly and in public and without an important letter.  There’s no l in his clock yet and both Jason and I have had to laugh when people look at Gage as he yells his mispronounced word. I am sure they are asking themselves why we would use such language in front of our kid.

I know this is just the beginning of embarrassing things Gage will say and I’m looking forward to it.  Now that he’s repeating words I’m really going to have to watch what I say!

His other new words this week are Cracker, Cookie, and Dog.  But just today he started saying Ball with his friend, Brooke. 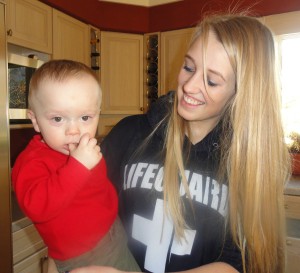 And he just said Car for Daddy. I wonder what his next word will be?