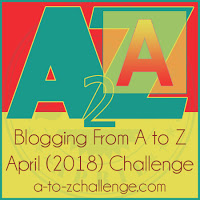 It’s April and time for another A-Z Challenge!

My list of some of my favorite characters in the autism spectrum.

Am I missing a favorite of yours?