Gage started all day Pre-K last month, 6.5 hours 4 days a week, and he is doing well.  He has one class in the morning and one in the afternoon, so two different teachers and friends, and he seems to have adjusted.  He loves eating lunch in the cafeteria with the big kids and has even managed to embrace ‘rest time’ on his cot, a thing I cannot even picture since he has not had a nap in well over a year (oh how I miss those naps!).  He is learning to draw new  things and his morning class even cooks once a week, usually something that Gage can’t eat.  The food is the bane of my existence right now.  I have to send in snack for both classes and send his lunch and if I want him to be able to cook I have to send in alternative ingredients.  I admit I’ve been grumbling about them cooking in class, but he has turned into my little helper at dinnertime, always wanting to help me with a recipe, so I should probably quiet the complaints.

So what have I been doing?  The first week I cleaned house and waited for a call from the teacher to come pick up Gage… which reminds me of a funny story I have to share. During the third week I went to pick him up and kids were filing out of the school with their class and the alarm was ringing.  After 10 minutes I finally went and found a teacher and asked what was going on. She said they weren’t allowed back into the building until the firemen had come and checked the building and turned off the alarm and then she said the words that had been what kept me close to the phone that first week.  She said that it had been the second time that day that a student had pulled the fire alarm.  I nervously laughed and said, “I hope it wasn’t my kid.”  She said the first kid had been sent home – I later find out it’s Gage’s friend from his morning class. LOL.  I never did find out who the second kid was but as long as they didn’t catch my kid I’m good.  He still thinks it’s funny that his friend pulled the alarm. I would be more worried about this if I didn’t know that he hates the piercing sound.

As Gage has gotten more comfortable at school, I have easily adjusted to my free time.  That second week I think I came home and took a nap every day. I’ve started decluttering the house, cooking new recipes (none of which Gage really likes), and planned play dates for me and for Gage 🙂  To put it simply, I am in a very good place.  I feel more relaxed and myself than I have since before Gage was born.  I can credit Gage’s school for much of my comfort.  Some of these aides or class therapists have known Gage for over two years now.  He is in very good hands and I get to let my body decompress.  I think I am going to like this school thing!

A few pics of this first month of the school era 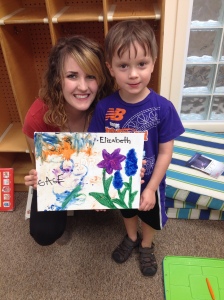 His OT intern left after 4 months 🙂

We’ve had a few playdates.

9 thoughts on “Sundays with Gage – a new era”