So, another Sunday and I’m still fighting a bug.  Lost my voice this week and it is slowly coming back online.   Do you know how hard it is to tell a 2-year-old NO a few dozen times a day with no voice?  Let’s just say I spent much of this week being ignored.  So, this meant that my plans for a book advent with 24 days of activities was curtailed this week.  We managed only two and the first one shouldn’t even count!

We read The Child in the Manger, the first time Gage lasting only a few pages.  Each time we read it we made it a little further and I thought we were ready for the activity.  Telling the story as we put up our nativity.  Seriously, you’d think I don’t live with a two-year old.  I thought (or did I) that I could hand Gage a new toy and he was going to put it in the nativity without playing wildly with it first?  As you may have guessed already, meltdown ensued and nativity had to be removed from sight.  Lesson learned.  Next year get him his own play nativity set.

Next up we read Counting to Christmas which Gage didn’t care for much.  But one of the activities in the book is decorating cards and putting them in the mailbox.  Gage is not a crafter.  In his mommy and me class he is the first one up from the craft table if he sits down at all.  As an easy fix I thought he could help put stickers on a few envelopes and then we could walk down to the mailbox.  He actually helped with more later, but we only started with two.  His favorite part was playing with the stickers and playing with the mailbox. 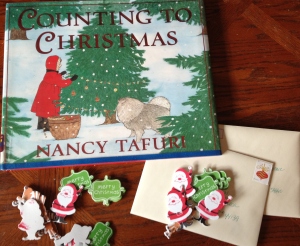 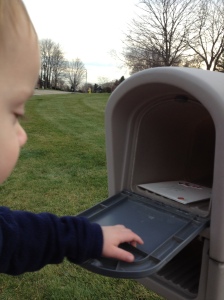 18 thoughts on “Sundays with Gage – Plans are for healthy people”