If you knew the date of your death, how would you live your life?

It’s 1969 in New York City’s Lower East Side, and word has spread of the arrival of a mystical woman, a traveling psychic who claims to be able to tell anyone the day they will die. The Gold children—four adolescents on the cusp of self-awareness—sneak out to hear their fortunes.

The prophecies inform their next five decades. Golden-boy Simon escapes to the West Coast, searching for love in ’80s San Francisco; dreamy Klara becomes a Las Vegas magician, obsessed with blurring reality and fantasy; eldest son Daniel seeks security as an army doctor post-9/11; and bookish Varya throws herself into longevity research, where she tests the boundary between science and immortality.

A sweeping novel of remarkable ambition and depth, The Immortalists probes the line between destiny and choice, reality and illusion, this world and the next. It is a deeply moving testament to the power of story, the nature of belief, and the unrelenting pull of familial bonds.       from Goodreads

Would you want to know the day of your death?  I can see both sides of this argument, but always seem to come back to the same thought.  I wouldn’t want to lose the joy and miracle and possibility of every day by knowing.  We chose not to know the sex of our baby either.  I wonder if there’s a correlation between the two?  Let me know what you think.

Anyway, we’re talking about the book.  So much potential.  Simon, the first sibling story, is by far the best section of the book.  It made the most sense.  He knew he was going to die young, when he had the opportunity to move across the country and embrace his homosexuality, he took it and never looked back.  His story overlapped a bit with Klara’s since they were roomies in San Francisco, so by default, her story also felt genuine.  It was Daniel’s story that derailed a decent novel.  Daniel and Varya both fell prey to too much sensationalism, in my opinion.

I liked it, but did feel like it wasted so much potential, especially the second half of the book.  This feeling was shared by most of my book group and we even had one who didn’t make it through Simon’s story before putting it down.  But hey, at least we had good food and company 🙂 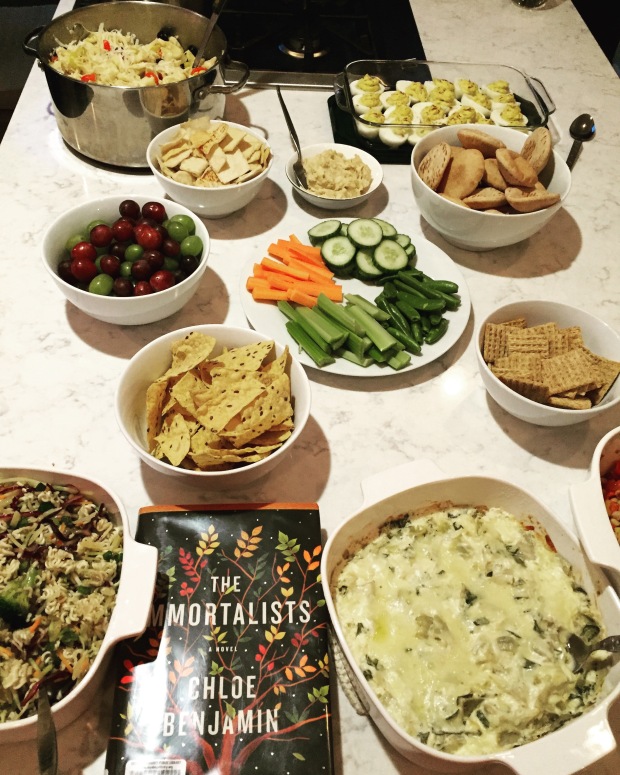 9 thoughts on “The Immortalists by Chloe Benjamin”