Paulo Coelho’s masterpiece tells the magical story of Santiago, an Andalusian shepherd boy who yearns to travel in search of a worldly treasure as extravagant as any ever found.

The story of the treasures Santiago finds along the way teaches us, as only a few stories can, about the essential wisdom of listening to our hearts, learning to read the omens strewn along life’s path, and, above all, following our dreams.  from Goodreads

I’ve always wanted to read The Alchemist and decided to give the graphic novel a try first. I was concerned when I saw the depictions of women in the first few pages. 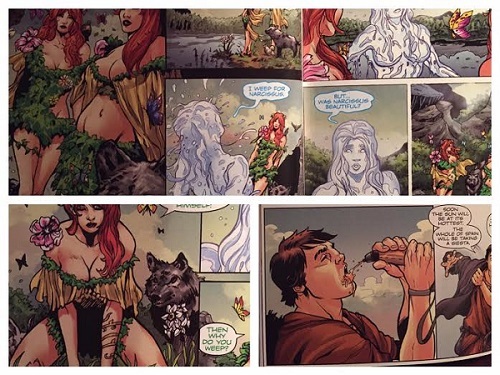 But I soldiered on and luckily the illustrator’s dream girls didn’t last past a few pages.  Still…  Anyway, I liked this parable adventure story and enjoyed it for what it was.  It didn’t change my life or world-view, but it was a quick enjoyable story of a boy who was told that dreams can become reality if you believe.  I probably won’t read the original, but am glad I know the story of this modern classic. 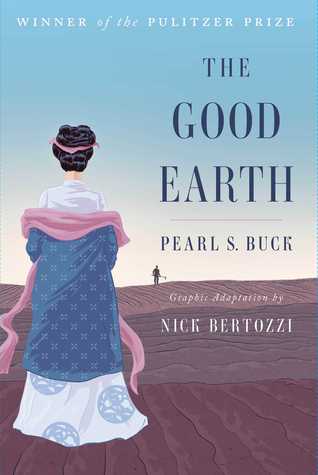 Pearl Buck’s 1931 Pulitzer Prize–winning classic about the rise and fall of Chinese villagers before World War I comes to life in this graphic novel by Nick Bertozzi.

In The Good Earth, Pearl S. Buck paints an indelible portrait of China in the 1920s, when the last emperor reigned and the vast political and social upheavals of the twentieth century were but distant rumblings. This story of the honest farmer Wang Lung and his selfless wife O-Lan is must reading to fully appreciate the sweeping changes that have occurred in the lives of the Chinese people during the last century.  from Goodreads

I was never all that interested in reading the classic novel, but I’m so glad I gave this a chance because I really enjoyed it.  The monochromatic illustrations (pinks and blues with the occasional red) worked and set a mood.  I liked Wang Lung, until I didn’t and then I really didn’t.  His tireless wife, O-Lan, one of the more sympathetic characters I’ve come across in a while.  My biggest complaint was that nowhere did it say that this was part one of a trilogy, so there was no ending. I will most likely pick up the next book to see what happens.

Amir is the son of a wealthy Kabul merchant, a member of the ruling caste of Pashtuns. Hassan, his servant and constant companion, is a Hazara, a despised and impoverished caste. Their uncommon bond is torn by Amir’s choice to abandon his friend amidst the increasing ethnic, religious, and political tensions of the dying years of the Afghan monarchy, wrenching them far apart. But so strong is the bond between the two boys that Amir journeys back to a distant world, to try to right past wrongs against the only true friend he ever had.   from Goodreads

This book was heartbreaking and I can only imagine that the novel is so much more so.  I don’t think I could willingly bring that much pain into my life right now, so I’m glad that I read the graphic novel. Children exposed to horrors they can’t understand.  Ultimately, it is a story friendship with the lesson of not waiting to mend your fences.