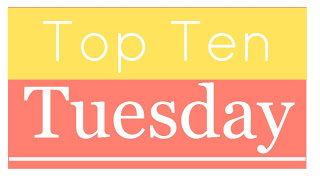 Top Ten Tuesday is hosted by The Broke and the Bookish.

I’m not great at making a list and sticking to it, especially this time of year, but the first two on my list are must reads by the end of the year.  The rest are just me playing catch up with a few series and the holidays are a great time to catch up with old friends 🙂

So, kind of a boring list for all of you but a good focus for me 🙂

Do you have a list of what you want to read this winter or are you winging it like I usually do?