A few weeks ago I reviewed this book and talked about our intention to do it.  Well, I’m a week in and Gage is on day 4. This diet is hard! It essentially starts as an elimination diet so you start with about 6 things to eat (all having to be cooked for 4 hours through stage 4) and add one fruit or vegetable each day.  After 3 months we can try adding nuts (nutbutter, nut flour) and then beans soaked for 12 hours.  It’s a healthy diet but one that will be difficult to do forever, I’m setting my sights for one year.  Eventually I can add in dry red wine, my favorite anyway, so I’ve got something to look forward to!

Let me tell you a little about my experience mainly because I can accurately describe what I’m feeling and with Gage there’s a lot of guessing going on.  I made a food chart for each food as I introduced it and then wrote the first two stages after the Intro so I could plan accordingly on the frig. 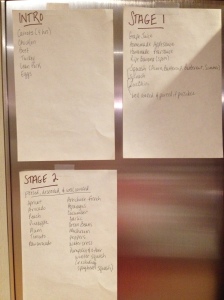 Then I spent most of the hours in each day in the kitchen and that is NOT an exaggeration.  I’ve had to cook two chickens to make the needed healing broth of this diet (4 hours to cook and another hour to debird and put away).  This is by far the messiest and grossest part of the cooking.  I convinced my mom to come over and make applesauce with me since I’d never made it  and it came out beautiful and delicious. 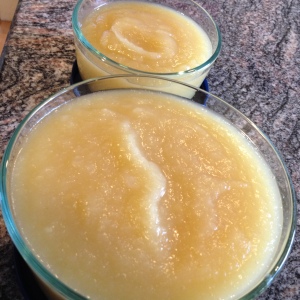 I’ll admit that my attempt to make pearsauce yesterday didn’t turn out as great.

I ate a lot of this 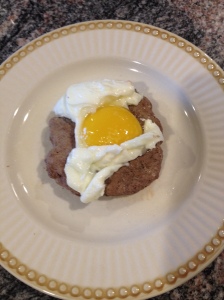 (obviously I’m a work in progress when in comes to eggs, this is my first one where I actually kept the yolk intact and I’ve since done it three more times).  Everything must be made from scratch.

I felt pretty sick on day two and spent a good portion of the afternoon in bed.  I had a blinding headache off and on for the first four days and I had ZERO energy those first few days.  Even now on day 8 my energy is at about 50%.  But I’ve never really felt hungry. All that protein is filling.

Ready for exciting part? I’ve lost 7 pounds!  Not even trying, but there it is.

Okay. So Gage started Thursday after school and I did have to allow a few things from stage one (homemade applesauce and bananas) to get him through.  He cried about eating stuff he didn’t want and not having snacks or chocolate, but he was doing okay.  Then yesterday morning he woke up, ate half a banana, vomited, went to bed, vomited some more and pretty much spent 8-2 in his bed or ours preferring dark and quiet. 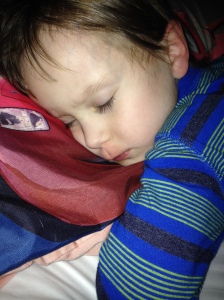 I read that this might happen and that it was actually a good thing since it meant that the bad gut guys were detaching themselves, but I still worried.  Then I got him to keep some applesauce down and he bounced back.  Like really bounced back becoming chatty for the rest of the day and actually eating chicken/squash broth soup with carrots!  Seriously, I didn’t really think that could happen.

This diet is going to change my life tremendously.  I will now have to spend more time in the kitchen than I really want to and forgo eating out.  I made Gage a promise that we’d evaluate how things were going at the six month mark and see if we thought it was worth it. There are only two things that would make me change my mind about that, Gage losing too much weight or the docs finding something at his scope in January.  Wish us luck!!!

15 thoughts on “Sundays with Gage – the Specific Carbohydrate Diet”