Four books arrived in my mailbox the past few weeks.

The first, A Housefly in Autumn is written by my old Barnes & Noble boss in Okemos, Michigan.  You can enter the Goodreads giveaway here.  He also writes an excellent blog about being a dad to 3 small boys, Snoozing on the Sofa.

A Housefly in Autumn is intended for Young Adults and up. A historical novel, set in 19th century Europe, it follows the life of a young man whose dreams have crumbled down around him. In an act of heroism, he sacrifices his own promising future to save the life of another. Now he must decide whether to cling to the unlikely hope of regaining his old life, or aim his efforts toward making the most of the life fate has dealt him. Though it is difficult to let go of the rewards that life once promised, perhaps the greatest rewards are the ones earned by building new hope from the bits and pieces of wrecked dreams.

Then I received The 3rd Woman for a TLC Book Tour next month.  Looks good!

The United States have yielded to the People’s Republic of China – Beijing has written off trillions of dollars of US debt in return for a permanent military presence on US soil. America is now a former global superpower, dependent on and junior to China. And the evidence – cultural and political – is everywhere.

Madison Webb is a work-obsessed journalist who will do anything to get to the heart of a story; to expose lies and corruption. When her sister is brutally murdered, the police seem too eager to write it up as an isolated incident. Madison starts digging and uncovers a series of similar rape-murder cases.

As her investigation beings to attract the media spotlight, Madison draws the attention of some powerful people. And when she reveals the link between the victims, Madison will find out that the Chinese military makes for a terrifying enemy…

And I ordered the next two books of the Blue Heron series.  Can’t wait since I loved the first two.

Colleen O’Rourke is in love with love… just not when it comes to herself. Most nights, she can be found behind the bar at the Manningsport, New York, tavern she owns with her twin brother, doling out romantic advice to the lovelorn, mixing martinis and staying more or less happily single. See, ten years ago, Lucas Campbell, her first love, broke her heart… an experience Colleen doesn’t want to have again, thanks. Since then, she’s been happy with a fling here and there, some elite-level flirting and playing matchmaker to her friends.

But a family emergency has brought Lucas back to town, handsome as ever and still the only man who’s ever been able to crack her defenses. Seems like maybe they’ve got some unfinished business waiting for them—but to find out, Colleen has to let her guard down, or risk losing a second chance with the only man she’s ever loved.

Emmaline Neal needs a date. Just a date—someone to help her get through her ex-fiancé’s wedding without losing her mind. But pickings are slim in Manningsport, New York, population 715. In fact, there’s really only one option: local heartthrob Jack Holland. Everyone loves Jack, and he won’t get the wrong idea…. After all, Jack Holland would never actually be interested in a woman like Em. Especially not with his beautiful ex-wife creeping around, angling to reunite ever since he rescued a group of teens and became a local hero.

So what arrived in your mailbox this week?

I feel like I have been absent from the blogging world this summer even though I have posted a few things and visited a few of you.  The first few weeks meant lots of Gage and mommy time and the last few have been camps and a quick July 4th trip to Michigan.

This is a picture of a picture so sorry about the glare.  Here he is at nature camp, 5th one from the left.  These are 3&4 year olds and the camp is 3 hours, up to half of that walking through the miles of trails they have.  He likes it a lot and will be going 4 more weeks this summer.  It’s in Shaker Heights and takes us 20 minutes in rush hour to get there. I spent the first week exploring the area by walks of my own and some shopping.  I’ve already told Jason I would love to live the area near the nature center.

This last week I took him downtown for week of camp at the Great Lakes Science Center.  This is picture is from first day drop off, there were 15 kids in his group.  Unfortunately, camp was from 8:30-11:30 which meant I was driving during rush hour.  It normally took 35 minutes but one day it took an hour! I decided to treat this camp as a mini-break for me and spent some time exploring the waterfront area, one day my mom joined me and one day I met Jason for coffee.  It was a fun week, but by the time we got home for lunch every day I was exhausted!  He loved this camp too, but I’m honestly not sure how much science was going on.  On the first day Gage’s favorite thing was riding the elevator and the rest of the days I heard a lot about the indoor playground. Cleveland gets a bad rap much of the time so I want to share a few pics I took so you can see that it has some beauty too. 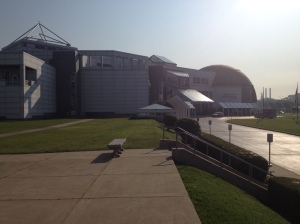 The Science Center from the front, back, and inside.  Yes, that is the back of the Rock and Roll Hall of Fame from the inside and those benches between the two buildings were my favorite reading spot.

. On the other side of the HOF is the Coast Guard. I walked by at 9:10 one morning and they were playing a game of football outside. You might be able to see them if you look closely. 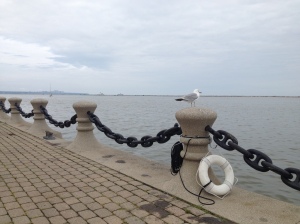 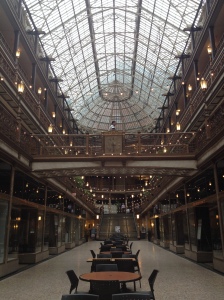 The Arcade is beautiful and attached to the Hyatt if you are ever looking to stay. And now indulge me further with a few photos of the Eastman Reading Garden between the Historic Main Library and the newer Louis Stokes Wing.  I was enchanted. 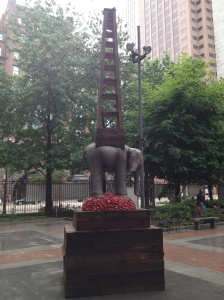 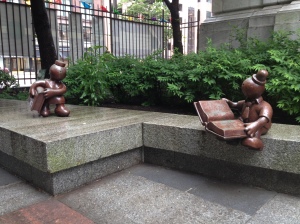 Have you been to Cleveland?

Fun fact –  Cleveland was home to the first electric traffic signal in 1914.