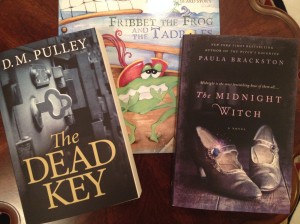 1. The Dead Key by D.M. Pulley – I picked this one up at the author’s first book talk yesterday and she was fantastic. More on the talk later this week.

It’s 1998, and for years the old First Bank of Cleveland has sat abandoned, perfectly preserved, its secrets only speculated on by the outside world.

Twenty years before, amid strange staff disappearances and allegations of fraud, panicked investors sold Cleveland’s largest bank in the middle of the night, locking out customers and employees, and thwarting a looming federal investigation. In the confusion that followed, the keys to the vault’s safe-deposit boxes were lost.

Lilith is the daughter of the sixth Duke of Radnor. She is one of the most beautiful young women in London and engaged to the city’s most eligible bachelor. She is also a witch.

When her father dies, her hapless brother Freddie takes the title. But it is Lilith, instructed in the art of necromancy, who inherits their father’s role as Head Witch of the Lazarus Coven. And it is Lilith who must face the threat of the Sentinels, a powerful group of sorcerers intent on reclaiming the Elixir from the coven’s guardianship for their own dark purposes. Lilith knows the Lazarus creed: secrecy and silence. To abandon either would put both the coven and all she holds dear in grave danger. She has spent her life honoring it, right down to her charming fiancé and fellow witch, Viscount Louis Harcourt.

3. Fribbet the Frog and the Tadpoles by Carole P Roman – received from Red Feather Productions

Fribbet the Frog and the Tadpoles is another great voyage into problem solving and friendship, as well as an adventurous trip into the imagination.

Join the Captain No Beard and his friends as they learn the value of sharing our troubles with others and that help is always there when we need it.

Did you received anything fun in your mailbox last week?