Last week we took Gage to the Jump Yard, a huge warehouse filled with giant inflatables for kids, a snack bar, video games and rooms for birthday parties.  Here are a few pics to show how much fun Gage had. 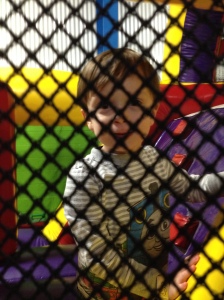 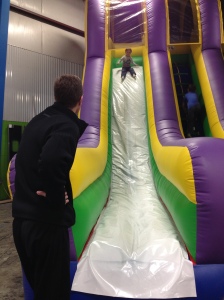 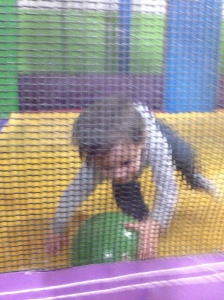 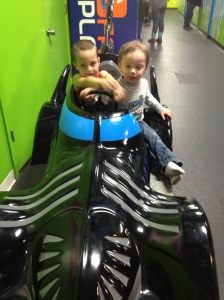 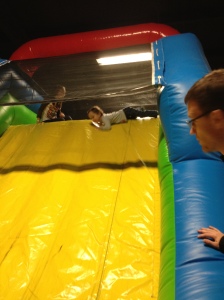 See, he even made a friend to run around with.

These pictures are a little misleading because they are all focused on Gage.  If I’d panned out a bit you would have seen hundreds of people, kids and adults, milling around.  It only got more crowded the longer we were there.  We made Gage sit down for juice and after three sips he was ready to go.  Jason got up and headed to the big room with him and when I looked up a minute later Jason was looking around for Gage.  I started looking around, not panicked because how far could he have gotten?  Through a sea of people I catch a glimpse of him going up the stairs and I take off in that direction, only a little nervous because there was slide way in back that I knew he was headed to.  It took me too long to get throught the bottleneck at the stairs and by the time I got to the top and turned the corner he was nowhere in sight.  I hightailed it to the back slide/obstacle course and couldn’t find him.  Most of these inflatables are so big you can’t actually see the whole thing so it took me a minute to realize he wasn’t there.  Being such a big place there are lots of doors that go to back rooms and he could have gone in any of them but I assumed that he was playing somewhere.  I made a circle of the upstairs, completely panicked by now and Jason was at the entrance downstairs.  This was not my best be-calm-in-the-moment-of-crisis moment.  There were so many people.  I even told a passing worker that I lost a kid and she just smiled and kept walking.

I headed to the back again to regroup and Gage is walking right towards me calm as can be.  Luckily we were in the area they have set aside for football games for dads and there was a chair and a quiet spot where I could sit him down and tell him he was in trouble.  Deep breath.  Gage was unconcerned and was mad that he had to sit down instead of running off to play.  This is the first time he’s been out of sight when there were that many people and it did not endear me to The Jump Yard.  Gage, of course, would like to go back every weekend. 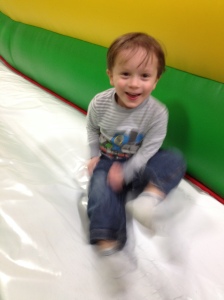 That smile and this were the two good things about  this excursion. 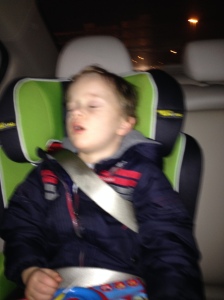 He hasn’t fallen asleep in the car for over a year!

Four year olds are fast and sneaky and ours outsmarted both of us.  We’re in trouble.