and you have chosen 50 of the 55 books I will read in 2010 for the Read Your Own Books Challenge.

Opening up the voting to you was fun!  71 of you voted for 1-5 books and the top vote getter was She’s Come Undone by Wally Lamb with 12 votes.  Here’s a photo of the top 50 vote getters.  Half of these books received 4 votes or more.

Start from the top left and you’ll see the books with the most votes.  The last stack on the right received 2 votes each.  There were 5 others that had 2 votes, but I was able to choose which ones not to read.  It was nice to have some choice 🙂  Here are the others that received 1 or 2 votes. 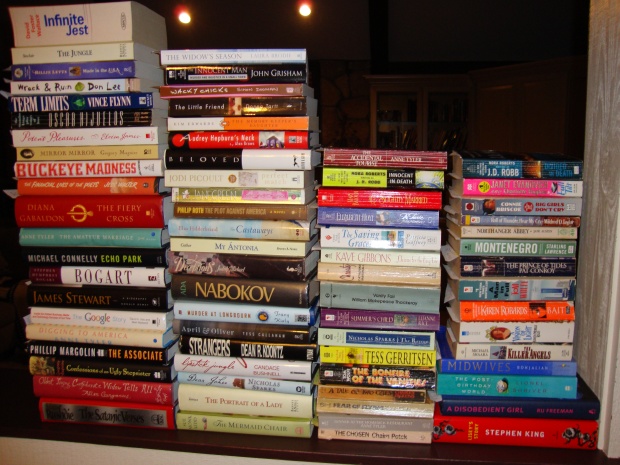 I cannot tell you how much fun it has been watching the votes come  in!  The book I am most excited to read, based just on the comments left by the 8 people who voted for it?  The Tea Rose by Donnelly.  The one I’m most intimidated by?  War and Peace by Tolstoy.  Yikes!

I want to thank each of you who voted.  As I review each book I’ll give a shout out to the people who voted for it.  Now for what you’ve all been waiting for.  To choose a winner I had all of the books that had received votes lined up with a paper in it that had each of the voter names.  I told Jason to go shopping for a book and he chose The Glass Castle (maybe because he brought this home for me from work) and then told him to choose a number between 1-10.  He chose 7.  The 7th person to vote for The Glass Castle?  Alita of AlitaReads!  Alita will receive a $20 gift card to Barnes & Noble.  If I could afford it I’d sent one to each of you.

You can see the list here with the people who voted for each one.  Thanks for choosing half of my reading list for the new year 🙂