Two years ago Jason had a work conference in downtown Manhattan and Gage and I tagged along.  It was August and about 100 degrees every day we were there. Gage didn’t want to walk much.  It was not the best experience for this mama who loves New York City.

This year the work conference was in June at the Grand Central Station Hyatt and we decided to try again.  Of the 4 days we were there it was upper 90’s twice, but because Gage was more willing to walk and I planned a bit better the trip was much more successful. Gage loved the city, even though he did mention that it wasn’t really for kids.  We did manage to find a playground he liked in Hell’s Kitchen and it was only a 15 minute walk  through Times Square.  He made friends both times we went.

Being in midtown made it much easier to get to Central Park so that’s where I wanted to spend most of this trip since we had done most of the downtown area last time.  We visited The American Museum of Natural History, the Central Park Zoo as well as walking completely from one side of park to the other on the hottest day because I got completely turned around in the Rambles.  This is what poor Gage looked like by the time we got to the subway that day – dripping with sweat but still happy.

This is what he looked liked when we got on the completely packed train with nowhere to sit or move.

We visited a few churches, St. Bart’s and St. Patrick’s, both of which I’ve visited many times before, but wanted to share them with Gage.  We were even able to catch Mass at St. Patrick

We ate lunch at the library in Bryant Park, we walked through Grand Central Station multiple times a day and, for the first time, we parked in New Jersey and took the train into the city.  A fun experience for all three of us.

We did a lot of walking and I was proud of him.  I will say that my biggest complaint was staying at the Grand Hyatt.  We could not walk out of our hotel (even the just the lobby, really) without having a tight grip on our seven year old.  He was a champ and loved all of the people and I convinced him that we needed Daddy to find a job here for a year so we could do more exploring 🙂  No more than a year.

It was a great experience and this was a perfect age to introduce him to one of my favorite cities, two years ago was too soon.  Even though he had fun when we asked him his favorite part of our trip he chose the day before we got to New York where we stopped at Hershey Park in Pennsylvania.  We happened to be there the same day that my cousin from Maryland was there with her family and we were able to meet up briefly. 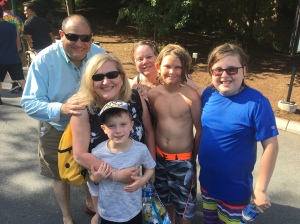 I know he chose the Park because of all the roller coasters he was able to ride now that he’s 48 inches, but I like to believe that seeing family had a little something to do with it!