The further we get from September the more behind I get in writing reviews for the books I read.  So, I’m catching up a bit with five memoirs that I found to be good to okay. 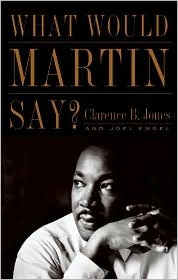 Martin Luther King Jr. was a man taken to soon by a madman’s bullet (too common even today because of the NRA). What would have happened if he lived (would he still be attending RNC conferences?)?  How different would America look?  See what I did here by adding pointless political comments that add nothing to the conversation?  Clarence B. Jones, King’s personal lawyer for eight years, couldn’t seem to stop from adding these asides to illuminate the Republican party in a positive light. The first half was so interesting and I loved the behind the scenes look at history.  It led to great discussions with Jason as I was reading.  This was pretty much a play by play of the conservative view of race and how it should be handled.  I recognized all of the talking points, but the stories and the ease of the storytelling made it fresh.  Then halfway in he turned to immigration, anti-Semitism, and terrorism and it felt more like Jones justifying how he felt and using King to do so.  The problem is that these are different problems than when Martin was alive and Jones was too adamant about putting words in King’s mouth, understandable since he helped write King’s speeches.  I no longer felt like he was channeling King.
So, it was a mixed bag for me.  I loved the history and personal stories.  The beginning about how King recruited him was fun and also showed a lot about King himself.  It was worth reading for sure, but it did disappoint in the end, not because I agreed or disagreed, but because he never really convinced me that he knew with certainty what Kings’ views would be.  It was a discussion starter for sure.

I’m not sure why I was expecting something funny, but I was.  Although Waldman does write with humor this book was heartfelt and dealt with some heavy topics.  Sex, abortion, bipolar disorder, sexual identity, social media pushback, four kids with different needs.  There’s a lot to take in and appreciate.  Her honesty was admirable, her battles recognizable, and her love of family inspiring.  I really liked this one even though it wasn’t the barrels of laughs I was hoping for.

Gill was successful ad man in New York City who met lots of famous people growing up.  His father, a writer at The New Yorker, ran in some pretty interesting circles.  But one day in his 50’s Gill is let go from his job, has an affair and gets her pregnant and then must come clean to his wife and four children.  He wasn’t exactly eliciting a great deal of sympathy.  After several years of trying to make it on his own he was out of money.  He happened into a job at Starbucks and turned into a walking advertisement for the company.  I don’t doubt his sincerity and I loved the connections he made, but he was still a man who loved to name drop and still seemed a little oblivious to the real world.  But, all in all, it was a heartwarming story and made me want to be reading it at a Starbucks!

I have never read anything by Hermann Hesse, but on my mom vacation I saw this out of print book and was intrigued.  It is seriously like an Hesse Instagram.  Pictures, drawings, and book covers on every pages with captions to tell his story.  I thought this translation was fun and loved to see the pictures from pre 1900’s in Europe with the captions that told his story.  It didn’t necessarily make me want to read his classic Siddhartha, but I did find it interesting.  Instagram before its time.