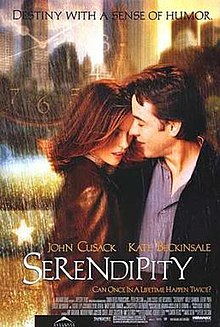 In honor of Valentine’s Day this month I’m going to try and review as many of the romantic movies on my list as I can.

Jonathan and Sara both have significant others in their lives, but when they meet at Bloomingdales in New York they share a very serendipitous night together.  Sara, a big believer in fate, wants to leave a second meeting to chance.  Fast forward five years and they are both engaged to other people but wondering if they have already met and lost their soul mate.  A last minute hunt ensues.

Why I Love It- I’ve seen this movie many times over the years and love it every time.  The main reason being the very romantic notion of soulmates, that one person with whom everything makes sense.  It has not been my experience that everyone has one true soulmate, but I love the idea of it.  I think when I first saw the movie, I was only a few years married and it held this magical appeal to me. Now, almost 20 years since my first date with Jason, the appeal is still there but I felt a little more sad for Jonathan’s fiancé when I watched it this time around.

There is no getting over the cute factor of these two.  Kate was radiant and John, not usually my cup of tea, was appealing.  They spent only a few days filming together but had lots of chemistry when they were onscreen at the same time.  This may be the one time I haven’t found Jeremey Piven a little twerpy and I loved him as Jonathan’s best friend.  The whole cast was great.  John Corbett as a world renown New Age musician was pretty funny.

New York was a great backdrop and the movie made no apologies for the coincidences that brought them together and kept them apart.  It was fate and I was caught up in its charm.

Perfect for a romantic rental!! This clip sort of sums up the movie…